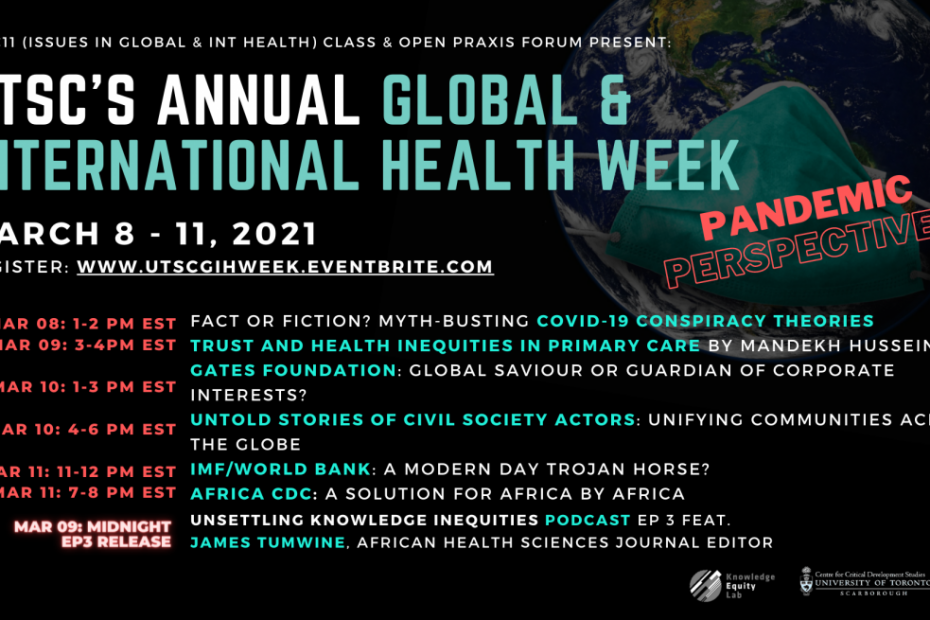 On March 9th, 2021, the Knowledge Equity Lab in collaboration with the IDSC11 Issues in Global & International Health class had the pleasure of virtually hosting one of its alumni as part of UTSC’s annual Global and International Health Week. Mandekh Hussein, a graduate from the Centre for Critical Development Studies who currently works as a primary care workforce strategy consultant and a lecturer at Brunel University spoke on the topic of “Trust and Health Inequities in Primary Care“.

The event attracted attendees from across North America and the United Kingdom. The presentation began by examining the sources of health inequities and the barriers to accessing primary care which enable such inequalities to persist. These included insufficient time with health professionals during appointments, language and cultural barriers, isolation caused by a lack of access to the technology necessary for digital consultations and the lack of a permanent address or immigration status when completing paperwork for appointments — mistakenly perceived as required by staff, when in actuality, everyone has a right to primary care.

Hussein also shared how practitioners learn about health inequalities early in their career, but struggle to implement these ideas into reality. She continued by suggesting ways to overcome these barriers. These included cultivating safe spaces for communities to voice their concerns with practitioners, using various tools and platforms to engage participants, and running workshops in local languages to disseminate misinformation. As an example, Hussein discussed her own work with the Somali community in England and how such conversations that took place in their own language allowed them to raise concerns and answer each other’s questions on pressing topics such as childhood immunization. While the talk also noted the ongoing challenge to engage some populations (including those who work night shifts or are otherwise unable to attend these community meetings), they are working to greater include those from the peripheries. At the centre of this approach to reducing inequities, Hussein stressed the importance of building trust, and taking the time to hear, respect and understand individuals, especially those who are most vulnerable. Overall, the talk was an enriching experience for all and sure to inspire many future actions and conversations.